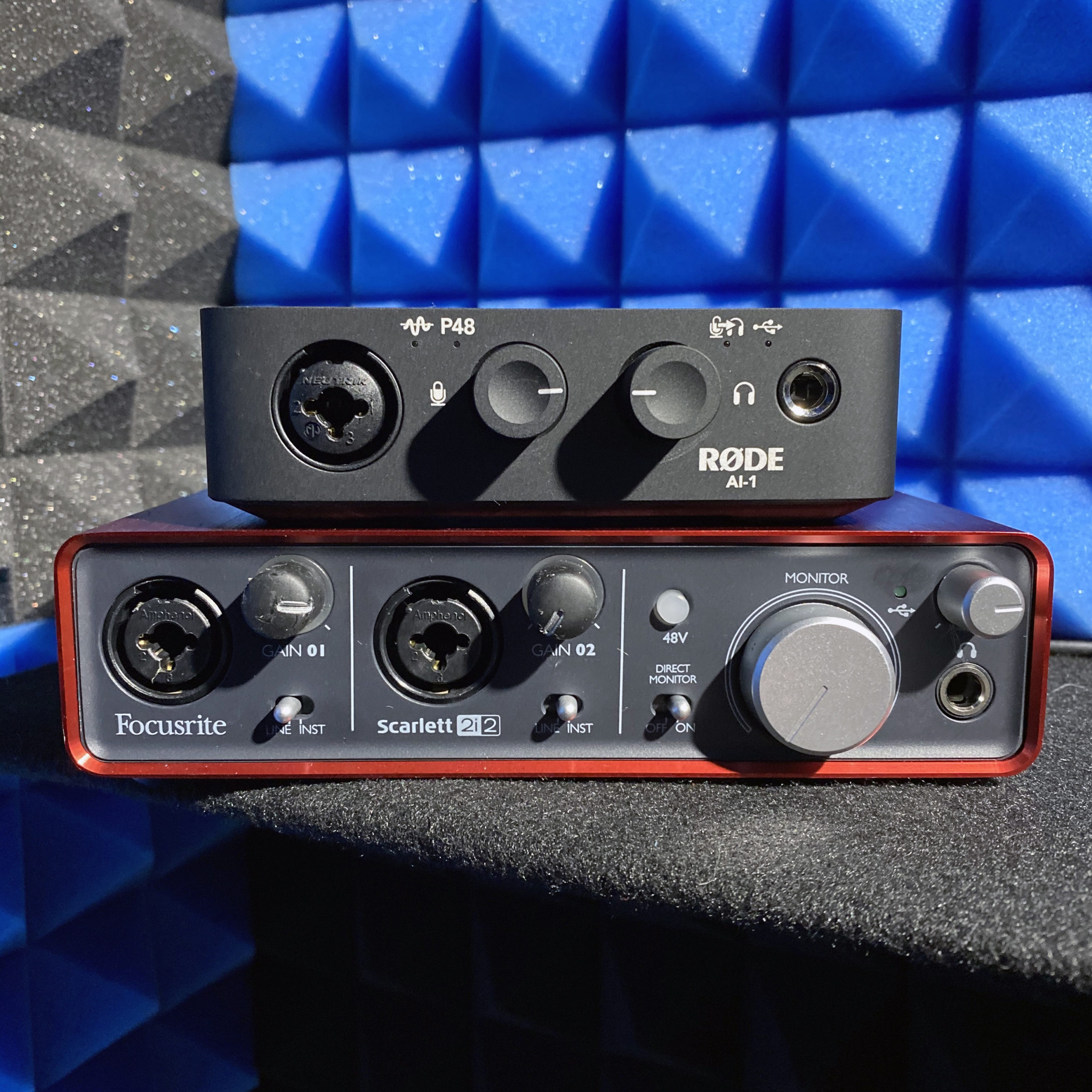 I have been using a Focusrite Scarlett 2i2 (2nd gen) for years to record from various XLR microphones into my Mac, and more recently into my 2018 iPad Pro. It has been working great. I really have no complaints for this workhorse of a USB interface.

This article answers the following questions:

This all started when I saw this video from Podcastage. He does reviews of mics, interfaces, and a whole lot more. A quirky guy, but he does amazing tech reviews. If you watch that review of the Rode AI-1 (released in 2017) and the Scarlett 2i2 at about 4:26 into the video, you’ll see him compare the self noise between the two units. You have to put on headphones, turn the volume up to 11, and then you’ll be blown away like I was.

I couldn’t believe the difference. Could it really be true? I called up Rode and spoke with a tech about this. He actually told me that the Scarlett 2i2 is a great USB interface and the specs (according to their respective websites) are basically the same. I referred him to Podcastage’s video, which he had not seen.

In an ongoing effort to reduce the noise floor as much as possible for my voice acting work, I decided to order the Rode AI-1 and put it to the test myself.

The biggest differences between the 2nd gen Scarlett 2i2 and the Rode AI-1 are:

A more direct comparison would be to test the AI-1 with the Scarlett Solo (also a single XLR input USB-C interface), but all I had at my disposal was my old trusty 2nd gen 2i2. Also, as of this writing both the 2i2 and the Solo have been out of stock everywhere. The AI-1 from Rode was readily available everywhere I checked.

What This Test Isn’t

Please note that this is not a “room noise” or “noise floor” test of any microphone. In fact, no XLR cable/mic is connected to these units for this test. This is purely a comparison of self noise, meaning the amount of noise the electrical components inside the interfaces create all on their own.

In my endless quest for the lowest microphone noise floor (room noise) possible, I have heavily invested in an in-home vocal booth, a high quality Mogami Gold XLR cable, and a Sennheiser MKH 416 microphone. Without breaking the bank on an over-the-top USB interface, I think I’ve found the answer to the best ~$100 USB interface to compliment my setup.

Shortly after receiving the Rode AI-1 I brought it into my vocal booth and did some initial tests. My initial reaction to the comparison was that, as noted above, the headphone output volume was considerably louder. I had to turn it down to about 1/4 of the way up in order to get a similar volume to what I needed on the 2i2 at about 3/4 of the way.

In short, the result of my testing was very similar to Podcastage’s. You can visually see the difference by taking a look at this screen shot from Adobe Audition. 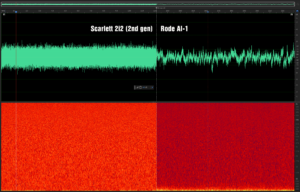 The first 12 seconds is the 2nd gen Scarlett 2i2, the rest is the Rode AI-1. Again, both at 100% gain output with no XLR cable attached. This is the sound they make on their own.

As you can clearly see from both the waveform and the spectral frequency display, the differences are significant. Even though both of the units are comparable spec-wise, it’s clear that different components are used inside.

The spectral display shows an accumulation of lower frequencies below 200Hz on the right for the AI-1, whereas the 2i2’s spectral display is more “hissy” with white noise all over the place, along with some low frequency rumble.

What this means to me is that if you do any minimal amount of noise suppression (whether that’s via processing or using a noise reducer plugin such as NS1 Mono from Waves), any self noise from the interface is going to be quickly squashed. Obviously this test shows a test with the output gain at 100% on the interface, then normalized to -0.1 dB for loudness.

I’m personally sold on it. I love the size of it, and it’s well made like the Focusrite Scarlett series of USB interfaces.

I’d love to hear your thoughts and questions about this test. Please comment below. 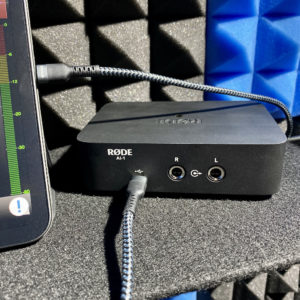 The 2i2 has been working great as an interface for my 2018 iPad Pro 11″ tablet. The benefits here shouldn’t surprise anyone… it’s faster than most computers, there is no fan noise, you can do a split screen to record and read your script, and it’s way more portable. I have been using the 2i2 and my iPad Pro (USB-B to USB-C cable) for quite some time now.

But does the Rode AI-1 work with an iPad Pro? Before purchasing, I wanted to make sure. Google was of no help, nor was YouTube. I called Rode tech support and spoke with a tech who had no knowledge of whether or not it worked. “I can’t see why it wouldn’t” he said. Since it was only a 3 year old product, I figured I’d give it a chance. Worst-case scenario, I could use it at my desk for the interface into my MacBook Pro, and keep the 2i2 in my vocal booth.

I emailed Rode tech support. I heard back today, 2 days later, the same day I received the Rode AI-1 from Amazon to test:

Thanks for your email. Unfortunately we haven’t had much luck with the AI-1 and iPad’s, so we don’t recommend it overall.

Even though Jason stated that Rode hasn’t “had much luck with the AI-1 and iPad”, I didn’t have any issues. Perhaps they weren’t testing with the latest USB-C iPad Pros?

You have to use a decent USB-C to USB-C cable, like this nylon braided one I bought from Amazon for 9 bucks. It worked like a champ, plus it’s “braided” which means even no reflection (yeah, I know I’m splitting hairs here).

I did also test a USB-C to USB-A cable, using a USB-A to USB-C adapter and that worked as well, but the end that did not have the adapter has to be plugged into the AI-1. If it was the other way around, it didn’t power up the AI-1. A straight USB-C to USB-C cable works either way, as you’d expect.

So yes, to my delight, the Rode AI-1 USB interface does indeed work with a 2018 iPad Pro (and I would assume the newer 2020 model and what’s to come).

Please comment below with your thoughts and questions! Thank you for visiting!

And The P2P Voice Over Winner Is…